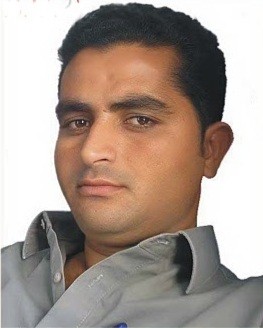 According to reports reaching PFUJ Secretariat, Lala Hameed was kidnapped on Oct 25 when he alongwith another friend was on his way to Gwadar on a motorcycle after attending the wedding party of a relative in Dasht (Bairy).

Both were allegedly arrested at security forces check point in Karwaat region near Gawader and since then had been missing. Lala Hameed's friends and family members believe that they were arrested and disappeared by security agencies.

Lala's body was found on Sunday in Sami Canal, 55 km away from Turbat

On the second day of Eid, the body was brought to Gwader and he was buried in his family Graveyard.

He was born in Haji Hayatan’s home on 8th February of 1985. He got his early education in Govt Model High school Gwadar.

He was elected student leader in his college days. He was also elected as member of Public Safety Commission introduced in Musharaf’s era.

He started his career as journalist with Daily Gurab Gwadaar. After Gurab dysfunction, he remained associated with Daily Tawar was known as dynamic a journalist interested in photo-journalism. Besides Daily Tawar, he also reported for Daily Karachi, Mahshar, Gateway, and Royal TV. He also played an important role in developing Gwadar Press Club.

Expressing its dismay and concern over killing of Lalal Hameed, the PFUJ said that it is very unfortunate that the environment in Baluchistan is not conducive for media praticitioares and the incidents of killings, abductions, threats and intimidations have become order of the day, and it has become very difficult for media persons to perform their duties independently.

The PFUJ demanded immediate arrest of all those involved in kidnapping and burial killing of Abdul Hameed who should be taken to task.

The PFUJ also appealed to the international journalist organisations to take notice of such highly condemnable incidents in Balochistan.