Overdose likely cause of death of Indian minister's wife- autopsy

Overdose likely cause of death of Indian minister's wife- autopsy 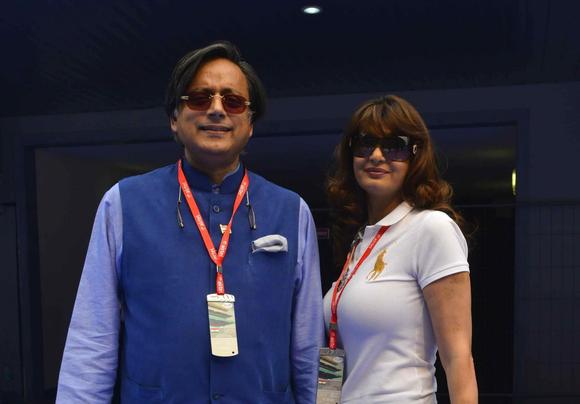 Sunanda Puskhar Tharoor (R), wife of India's Minister of State for Human Resource Development Shashi Tharoor, poses with her husband at the Indian F1 Grand Prix at the Buddh International Circuit in Greater Noida, on the outskirts of New Delhi, October 27, 2013.
CREDIT: REUTERS/STRINGER

(Reuters) - An overdose of anti-depressant drugs likely caused the death of the wife of a high-profile Indian federal minister, according to the results of an autopsy, days after she accused him of having an affair with a Pakistan-based journalist.
Junior Human Resource Development Minister and a former top U.N. diplomat Shashi Tharoor's wife was found dead in a New Delhi hotel room as their apparent marital woes spilled out into the open after she sent out tweets that suggested he was involved with the journalist.
Sunanda Pushkar, 52, probably died because of drug poisoning, two officials said on Tuesday, citing the post mortem report that was submitted to a magistrate leading an inquest into the death on Friday.
There was no suggestion as to whether the overdose was deliberate or not.
The report also said there were 15 injuries on Sunanda's body, but these were described as small and ruled out as a cause of her death. The injuries were on the upper part of the body.
The couple were married in late 2010, the third marriage for both of them, and were part of Delhi's social set, open and unconventional by the standards of Indian politicians.
Under Indian law, a magisterial inquiry is automatic if a woman dies within seven years of marriage.
"The conclusion of the post mortem report was death likely due to drug poisoning," said an official at the All India Institute of Medical Sciences where the autopsy was conducted.
The report was handed to magistrate Alok Sharma leading the inquest and another official confirmed the finding. There has been no suggestion of foul play.
Police found used strips of anti-depressant drug alprazolam, commonly known as Alprax, from the Leela Palace hotel room where Sunanda was found dead in her bed. The medicine, used by people suffering from anxiety, sleep disorder and depression is available over the counter in India.
"Very broadly, any medicine can be fatal if taken in large quantities," Dr Adarsh Kumar, who was part of the team that carried out the autopsy, told Reuters.
"It depends on the quantity, the route through which it has been administered, the physical and even the mental condition of the person."
Tharoor has called for a swift inquiry into the death of his wife, saying he was horrified to read speculative reports about their personal lives.
Sunanda said last week she had gone into his Twitter account and posted what she said were intimate messages from Pakistani journalist Mehr Tarar to expose a rip-roaring affair.
Tarar hit back saying she would sue Sunanda for calling her a Pakistani spy and denied having an affair with Tharoor. She said she was friends with Tharoor on Twitter and exchanged comments about articles she had written, but that was all.
Tharoor, a prolific author, testified before the magistrate in a closed-door session on Sunday.


(Reporting by Sanjeev Miglani; Editing by Nick Macfie)
Posted by shamsul Islam Naz at 7:56 AM