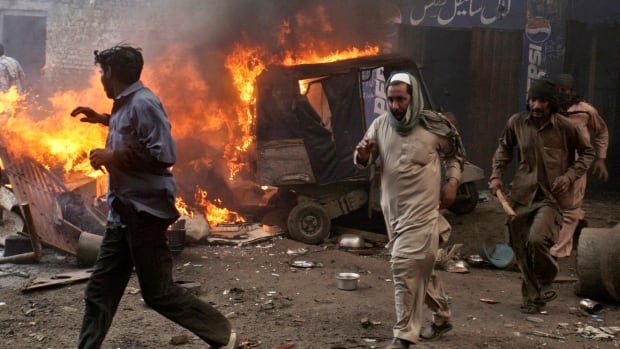 A mob of hundreds of people in the eastern Pakistani city of Lahore attacked a Christian neighbourhood on March 9, 2013, and set fire to homes after hearing accusations that a Christian man had committed blasphemy against Islam's prophet. (K.M. ChaudaryAssociated Press)
For the past 15 years, Muqtida Mansoor has been taking his life into his hands simply by writing.
His column, which appears twice weekly in the Urdu language Daily Express newspaper based in Karachi, Pakistan, has brought insults and death threats from extremists.
This has not deterred Mansoor from defending freedom of speech and challenging the rising tide of Muslim fundamentalism in his country.
In 2010, the press freedom group, the Committee to Protect Journalists, said Pakistan was the deadliest country on the planet for journalists. Some were gunned down, others were tortured.
Mansoor takes precautions, but he does not have a bodyguard or a weapon.
“People who have guards, they are killed in open daylight,” he told Michael Enright, host of CBC Radio's The Sunday Edition. “My pen is my weapon and I write with my pen.”
He has surrendered the freedom of socializing with friends in restaurants and other public places, opting instead to spend most of his time in the safety of his home.
“Everyone who is daring to write, daring to speak on the television, they are doing it on their own risk. This is the tragedy of this country,” he said.
Muslim fundamentalism has been growing in Pakistan since the rule of General Muhammad Zia-ul-Haq, who amended the country’s blasphemy law to add the death penalty.
In its 2014 World Report, Human Rights Watch said this about Pakistan: “Abuses are rife under the country’s abusive blasphemy law, which is used against religious minorities, often to settle personal disputes.”
In his conversation Enright, Mansoor described the scourge of what he called religious fascism.
He said people often are arrested under the blasphemy law without any investigation and are not tried in the courts because judges live in fear. Some have been threatened and killed. In rare cases when a judge releases a prisoner, he is often murdered outside the court house.
“The time of death is fixed,” Mansoor said. “It may be on the bed or by the bullet of another person, this doesn’t matter. I shall continue writing and there is not any kind of hesitation in my mind.”
Posted by shamsul Islam Naz at 11:29 AM