When alpine ski racer Lindsey Vonn found out she would have to miss the Sochi Winter Olympics in order to get knee surgery, she was naturally super bummed out. So what did she do to make herself feel better? She adopted a dog: 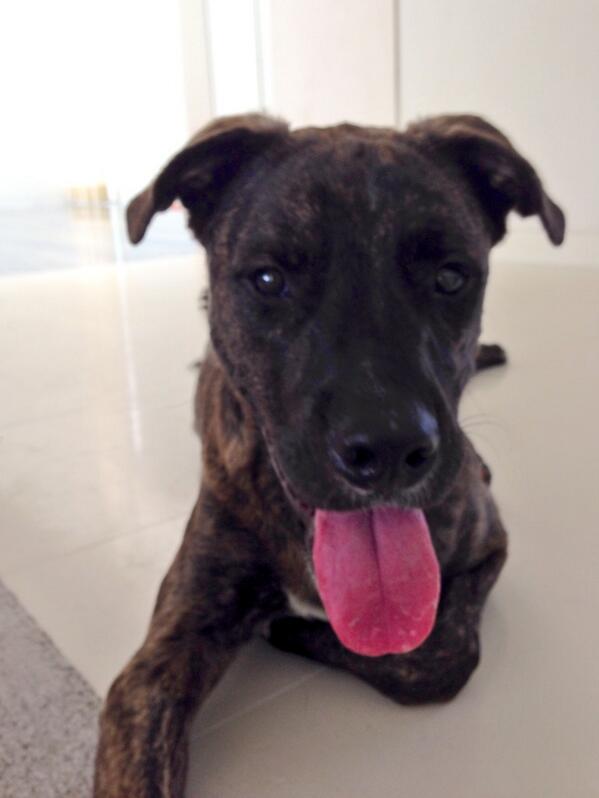 Leo seems like a very logical mood-booster. Anyone who owns and loves a dog knows it becomes hard to live without their consistent and utter devotion to you. And even though they may love you at least partially because they literally rely on you to do things like eat, it's a two-way road when you own a dog. You may keep them alive by feeding and taking care of them, but they are also taking care of you.
Numerous studies have shown that owning a dog benefits a person's physical and mental well-being. So read up, and then go thank your pup for making your life so much better.
1. You're also getting a walk when you take your dog out.

Sometimes it may seem like such a nuisance (especially in these colder months), but walking your dog helps you stay more active than people who don't have to walk the dog. A 2006 Canadian study found that dog owners were more likely to participate in moderate physical activity than those who didn't own a dog. They walked an average of 300 minutes per week, compared with non-dog owners, who walked an average of 168 minutes per week.
2. Dogs can strengthen the bonds between humans.

A recent study at the Cummings School of Veterinary Medicine at Tufts Universityfound that people who have strong connections to their pets also have social and relationship benefits. The researchers surveyed 500 18- to 26-year-olds and found that those who had "strong attachment to pets reported feeling more connected to their communities and relationships." They also found that the more attached a person was to an animal as a teenager and young adult, the more empathetic and confident he or she was.
3. Some dogs can detect if you have cancer or not.

A black lab named Marine could save your life. The specially-trained eight-year-old dog can detect when a person has colorectal cancer 91 percent of the time just by sniffing the person's breath. And if she smells stool, she can detect whether the person has colorectal cancer with 97 percent accuracy. It's estimated that a dog's sense of smell is up to a million times better than a human's.
4. Dogs can also help make sure you don't eat things you are allergic to.

Pups trained at the Florida Canine Academy can smell even the slightest hint of peanut in a room. This comes especially handy for people who have intense peanut allergies. These dogs are so good that they can detect peanuts in a cookie or in a candy bar that is wrapped in a lunch bag.
In Texas, a place called "Southern Star Ranch" provides trained dogs to people who are suffering with severe peanut allergies. One grateful testimonial tells the story of a family with a son who was so severely allergic to peanuts that he had to be home-schooled and could only have highly-supervised playdates. When he was nine, the family took in Remy, a peanut-detecting dog, who the family swears has a "college-educated mind." The dog detects peanuts before their son comes in contact with them, and now the family enjoys greater freedom.
5. Just looking at your dog will make you feel happier.

A 2009 study by Miho Nagasawa of Azabu University in Japan found that one's level of oxytocin (the neurohormone that elicits feelings of happiness) raised intensely after interacting with their dogs. And the only interaction they needed was to stare into their dog's eyes. Those who looked longer into their dog's eyes had the bigger dose of oxytocin. Fun fact: A dog's willingness to meet eyes with humans is one of the things that separates them from wolves.
6. A dog's face could bring out the caretaker in you.

Homans writes that Austrian zoologist Konrad Lorenz, speculated that a dog's face could possess an "infant schema" -- meaning that its "high forehead, big eyes, short snout and floppy ears might have evolved to take advantage of human's innate responses." The features are known as "social releasers" and can elicit a human caregiver's response.
7. Dogs seriously calm you down in high-stress situations.

Karen Walker, a psychology professor at the University of Buffalo, performed a series of tests that proved dogs help reduce people's everyday stress. She wired volunteers to blood-pressure monitors and had them count rapidly backwards by threes from a four-digit number (a task that seems simple, but is actually pretty challenging. Just try it.) She found that the subject's stress response was significantly lower if there was a dog in the room. In his book, Homans also cites a Japanese study that found elderly people who regularly walk a dog have enhanced heart rate variability, which is associated with stress reduction.
8. They help us recover psychologically from a crisis.

Dogs have been proven to help the recovery process of soldiers going through post-traumatic stress disorder. One army veteran, Robert Soliz, a former army specialist who served in Baghdad, found that engaging with dogs in a program called "Paws for Purple Hearts" helped him get his life back to the way it was before he left for war. When he returned, Soliz was so traumatized that he couldn't show any affection and struggled to even hug his kids. After spending six weeks with a golden retriever, Soliz began to feel more comfortable with his family.
9. Your dog could help prevent your child from developing eczema.

In 2010, a study found that children who were allergic to dogs but lived with at least one of them during their first year of life had a lower risk of developing the chronic skin condition eczema by age four. Interestingly, the complete opposite is true for cat ownership. Researchers found that children with cat allergies were 13 times more likely to develop eczema if they lived with a cat within their first year.
10. Your pooch could be your cure for loneliness.

Loneliness is common among the elderly. Studies have shown that in people 60 years of age and older, owning a dog (or a cat) were four times less likely to be diagnosed as clinically depressed. "The Waltham Book of Human-Animal Interactions: Benefits and Responsibilities" cites a study on medical visits by elderly people. The study proved that, compared with non-owners, pet owners made fewer medical visits over the course of a year.
11. Your dog will force you to be social, for better or for worse.

When you own a dog, you are forced to interact with people because you have to walk that dog in public. People are more likely to stop and say hello to you because you have a cute pup bouncing alongside you. In some cases, these interactions could change the rest of your life. Take the case of 71-year-old Emma Cooper, who had been living alone for eight years after her husband died. She told Psychology Today:

"I was out walking Surrey, my cocker spaniel and this man stopped to give him a pat. He seemed like a nice man and told me that he used to have a blonde cocker spaniel just like Surrey. We started to talk about living with dogs and then stopped for a cup of coffee. Well one thing led to another and Bill and I are getting married next month--as soon as we can find a clergyman who is willing to let a dog stand in as the best man!"

12. One study found that owning a dog could make you more attractive to potential love matches.

According to a study conducted by Dog's Trust, the United Kingdom's largest dog welfare charity, when they surveyed 700 people, 60 percent said that owning a dog can make people more attractive, while 85 percent think people are more approachable when they are with a dog. Even more, it could matter what kind of dog you own. In a survey by mobile pet app Klooff, certain dog breeds are more likely to attract members of the opposite sex than others. Men noted that they judged women with Chihuahuas as dumb, hot and easy; while women said they viewed men with bulldogs as one-night-stands. However, women really like men who owned Labrador or golden retrievers.
13. A dog makes us appreciate the simple things in life.

Homans presents one of the best arguments for why a dog is a great asset to one's life: The dog "takes us back to simpler modes of interaction." Homans writes, "In a world of email and texting and videoconferencing, a relationship with a dog is unmediated by technology." Couldn't we all use a cuddly canine to tear us away from our smartphones?
Posted by shamsul Islam Naz at 8:50 AM