Violence against journalists escalating in the Middle East

Violence against journalists escalating in the Middle East 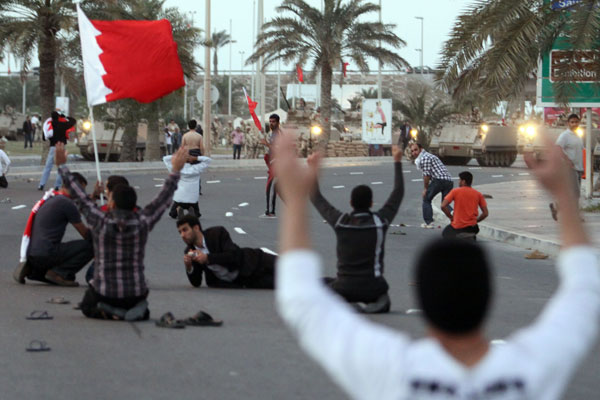 Several weeks after journalists in Egypt were attacked by pro-government mobs, a similar dynamic is playing out in neighboring Arab countries now staging popular protests against their own ruling regimes.

Inspired by the downfall of the autocratic regimes of Tunisia and Egypt, mass demonstrations have sprouted in Iraq, Iran, Yemen, Libya and Bahrain. In Bahrain the government response has been particularly bloody, and journalists are once more getting caught up in the unrest.

The New York Times reported Friday morning that two of its journalists were "shot at from a helicopter over Bahrain's Pearl Roundabout as they were filming a report there, minutes after the army opened fire on protesters trying to march into the area they had been cleared out of one day earlier in a deadly raid." ABCNews reporter Miguel Marquez was beaten in the midst of Bahrains's security crackdown several days earlier. On Thursday, a freelance journalist in Iraq was gunned down outside his home. Meanwhile, authorities invarious Middle Eastern countries have reportedly been detaining journalists and confiscating the equipment they've been using to report on conditions in the region.

"Governments throughout the Middle East and North Africa cannot deny their citizens coverage of these momentous events across the region," said Mohamed Abdel Dayem, Middle East and North Africa program coordinator for the Committee to Protect Journalists (CPJ), in a news alert issued Thursday evening. "Local and international media must be allowed to cover the news."

CPJ, a human rights-cum-media watchdog group, has been an influential press freedom advocate for the past three decades. (The organization celebrates its 30th anniversary in March.) But the group's profile has increased during the past month, as attacks on journalists in the Middle East have increased alongside popular unrest.

On Thursday alone, Dayem said he received about a dozen reports of attacks on journalists in the Middle East. He was in the midst of researching and confirming these tips when The Cutline paid a visit to CPJ's 11th-floor Manhattan offices near Madison Square Garden late that afternoon.

"It's as hectic as it's ever been. It's never been busier than this," said Dayem, 34, a Cairo native who's worked at CPJ for two years and as a human rights advocate for 10. Even as he sat for an interview, he kept monitoring the flow of emails from abroad as they hit his inbox every few minutes.

"This level of violence [against journalists] is unprecedented in the modern history of the Middle East," he said.

And the risks for journalists will only increase as protests spread throughout the region, Dayem said. At the same time, he's hopeful the government crackdowns on media will subside in the coming weeks, as MiddleEastern leaders ponder the way they backfired in Egypt and elsewhere.

Email ThisBlogThis!Share to TwitterShare to FacebookShare to Pinterest
Labels: Violence against journalists escalating in the Middle East