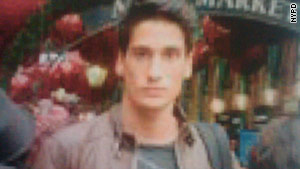 New York (CNN) -- A male model pleaded not guilty to the murder of a prominent Portuguese television journalist who was killed in his posh Manhattan hotel room last month, court officials said.

Renato Seabra, 20, who is also Portuguese, was indicted Tuesday on a second-degree murder charge in the killing of 65-year-old Carlos Antonio De Castro at the InterContinental Hotel in New York, according to Manhattan District Attorney spokeswoman Joan Vollero. He entered the plea in court Tuesday.

Castro's body was found shortly after an acquaintance appeared at the hotel asking to see him, saying she had been in contact with him earlier in the day but was unable to reach him for some time, officials said.

Hotel employees made the grisly discovery a short time later. Castro was found bludgeoned and castrated, according to a law enforcement source.

Police say Seabra was taken into custody that Saturday after he was spotted leaving a New York hospital where he received treatment for cuts to his wrists.

Police arrested him and transported him to Bellevue Hospital in New York, according to Detective Nell, a police spokesman who declined to provide his first name. He underwent a psychiatric evaluation at Bellevue, the source said at the time.

Seabra and Castro were staying together at the hotel after traveling from their native Portugal on December 29, according to a district attorney statement Wednesday.

Castro was most recently a gossip columnist for the Portuguese newspaper Correio da Manha. Seabra was a recent finalist on a Portuguese model-search television show called "A Procura de um Sonho."

It was unclear why the two men were in New York.

"We plan a vigorous defense, and we think we'll get a positive result," Seabra's defense attorney, David Touger, said Wednesday.

He said of his client, "Considering what he's been through, he's in pretty good spirits." Seabra is still at Bellevue, he said.

Posted by shamsul Islam Naz at 5:26 AM

Email ThisBlogThis!Share to TwitterShare to FacebookShare to Pinterest
Labels: Model indicted in killing of Portuguese journalist